Well, timeliness. There is a great deal of legislative change and industry and research developments happening right now in the United States and Canada. Doug Fine is certainly writing to bring people up to speed, for whom hemp is a new thing (hey the market is growing at 20% a year, so there’s certainly a need) but his book also has value for someone like myself who has spent 15 years on this plant in variety of capacities. Hemp Bound is good weave of standard hemp information with some-up-to-date reporting. Nice trick.

Who is this guy? Doug Fine is a daily user of hemp oil and food, a husband and dad, a back to the lander, solar power user and a believer and practitioner of sustainable agriculture (he’s a goat herder in New Mexico). Sure, he’s a dreamer, pretty much the kind of guy who is predisposed to like hemp. While clearly enthusiastic about cannabis prospects, Fine is self-aware enough to strive for objectivity. There is a solid moment when he relates his post college experiences working for a software magazine. Familiar with vaporware, Fine knows how to parse optimistic blue-sky statements with the realities of bringing a new product into the modern marketplace. There is often a gap between dream and reality and Fine knows that. 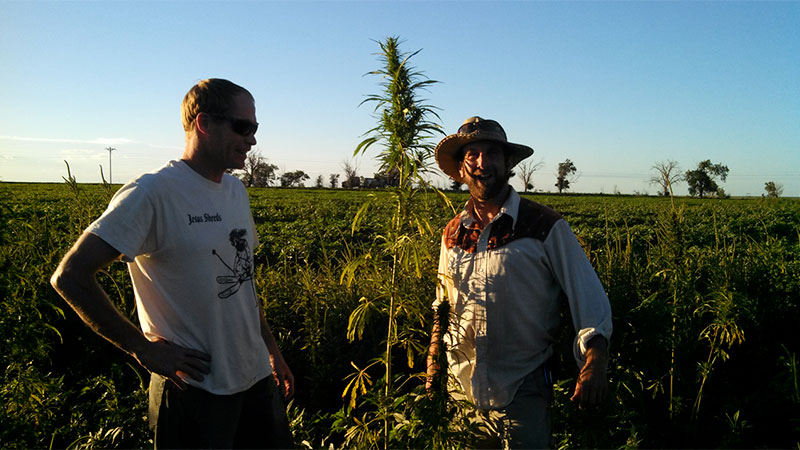 Hemp Bound is structured as a personal journey, a trip that takes Fine across the Midwest, to the first hemp field in Colorado where the dustbowl is stirring again, to the frozen February of the Canadian prairie, then over the troubled coal damaged lands of Appalachia. Where he can’t go, he Skypes to including New Zealand (Greg Flavall of Hemp Technologies), England (Ian Pritchett of Lime Technologies) and Netherlands (Mark Reinders of HempFlax) and others. Lots of legwork on display. Speaking firsthand to a diverse selection of experts, Fine touches all the main bases including the nutritional superfood richness of hemp seed, the admirable Dr. Bronner’s pure Castile soaps, biocomposites (a hemp tractor being developed in Winnipeg), building materials (hempcrete), biofuel (including a limo ride in a hemp-powered beast allegedly formerly owned by former President of the Philippines Fernando and Imelda Marcos), and bioenergy.

A consistent message in the book is the dual use economic feature of hemp as both a seed and fiber crop. Fines notes the success of hemp seed for food (with profiles of the start-up Boom Bar and the always expanding processor Hemp Oil Canada) and body care but gets really excited about the developing uses of hemp fiber. Modern uses, not just twine and textiles. While seed derived products are the big market driver right now for hemp growers, the future is going to include much more.

Style wise, Doug Fine writes from a first-person perspective without being overindulgent. A few personal and small descriptive details scattered all through his narrative ensures that his spiel remains grounded. I get that he dreams of cinnamon buns, and that his fingers freeze while texting outside in February. I can see the foxtails growing in the mosquito-happy hemp fields. These kinds of personal small details help animate a tale that might otherwise be a polemic of limited range. Keep the dryness for the lecturers and their textbooks.

My major criticism of Hemp Bound is that at 134 pages of double-spaced text is that it’s too short. It’s an enjoyable read and I greedily want more. Oh, there are some technical misstatements in places — there’s an embarrassing moment early when, writing about retting, he calls hemp hurd the “outer” fiber (page 4) and some exuberant overstatements (dude, Canada’s hemp sector is not a half billion-dollar industry … yet; Editor’s Note: The US market is estimated by the Hemp Industries Association to be approximately $500 million), but those are rare. Hemp Bound is a well told story with immediate relevance to anyone interested in the broad picture of industrial hemp.