The Use of Hemp in Traditional Chinese Medicine

Medical uses for hemp in China have a long, documented, cultural history, using all parts of the plant — the seed, leaves, “juice” (oil), roots and flowers — in both oral and topical applications. Interestingly and perhaps controversially to some, there does not seem to be a strong tradition of smoking the cannabis flowers where some texts considered that part of the plant to be poisonous. For the record, the earliest known references of hemp leaf medicinal tea are from 2700 BC while the earliest textual medical reference to using hemp seeds is from the 14th CE.

In Traditional Chinese Medicine (TCM), hemp is known as one of the 50 fundamental herbs. Hemp seed, known as Huo Ma Ren, is considered to have “sweet,” “neutral/ mild” properties, and is associated with the stomach, spleen and large intestines.

Because it has female and male plants hemp has both yin and yang energies. That said, the seed-bearing plants, the females, are more highly valued, so hemp is sometime considered to be a yin plant. Of course, Taoist thought holds that everything in nature has both energies — yin and yang are best understood as interdependent forms of being and energy.

There are many uses of Huo Ma Ren (Hemp Seed). It is most commonly prescribed as a laxative and to lessen constipation. Other popular, traditional uses include pain relief, as a sedative and to treat with nausea and to relieve nervous disorders.

Forms vary, sometimes the hemp is crushed and powdered, other times taking whole, still other times mixed with honey, water, or other liquids (including wine!). This is only the tip of it, as hemp seed and leaves are often mixed with other herbs to treat a variety of ailments and conditions. 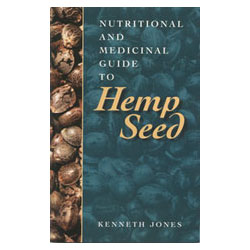 According to Jones’ classic book Nutritional and Medicinal Guide to Hemp Seed (1995), one medicinal formula for treating constipation with hemorrhoids includes hemp seeds, rhubarb, apricot, magnolia, penny root and the rind of an orange. Huo Ma Ren (Hemp Seed) is also used in association with acupuncture.

The dosage of hemp seed in a combination formula is between 9-15 grams (about 2-3 teaspoons); while as a main ingredient the dosage could be 45 grams, which is about three tablespoons.

The full range of uses for hemp in TCM are diverse and eclectic and according to the literature these also include (but is not limited to): use as a diuretic, in conditions related to childbirth, for destroying worms, as an anti-inflammatory, an antiseptic, as a menstrual corrective, and for treating edema.

Today, partly due to this rich tradition of TCM, Chinese companies possess just over 50% of the 606 patents filed for cannabis globally. As TCM is accepted in the West and is coming under western standards and regulations, there is a lot of opportunity to evaluate traditional formulations in research trials, laboratory analysis and pre-clinical and clinical studies. This kind of work is critical in making health claims in a modern legal context.

That said, the proteins, Essential Fatty Acids (EFA’s) and dietary fiber content of hemp seed are becoming very well known, and simply eating hemp as part of a regular diet is certainly not just for sick people.